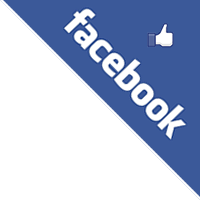 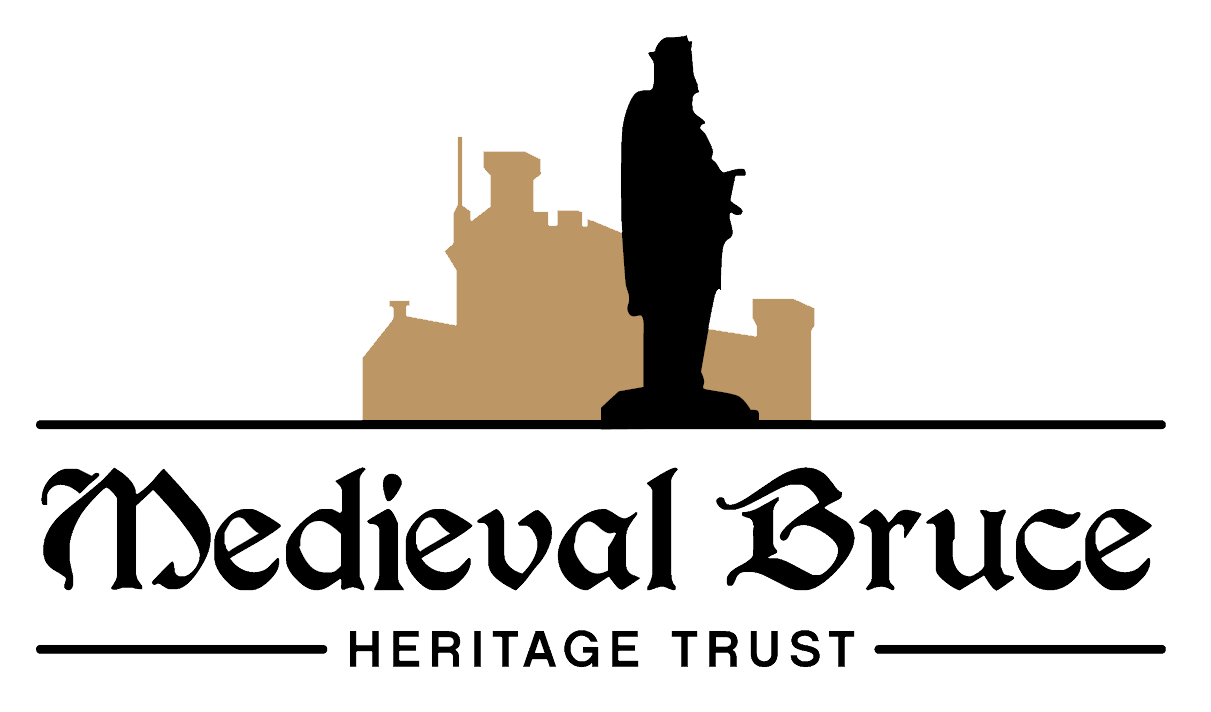 Recognised Scottish Charity SCO49156
Please click on the marked areas on the map to view more. 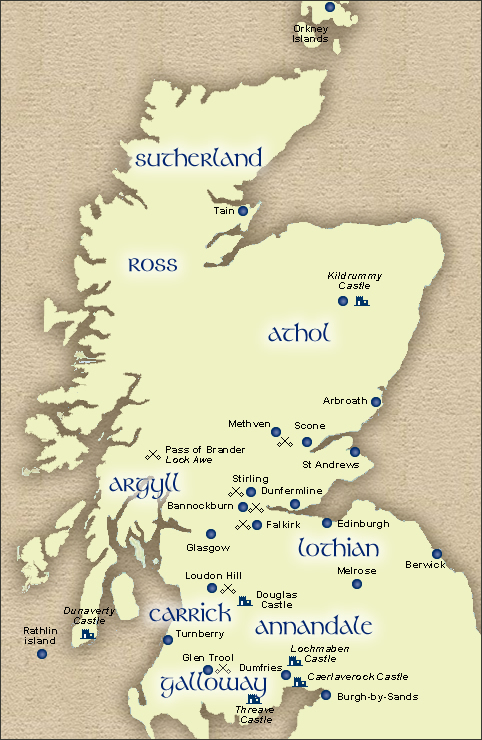 
1286
March - King Alexander III falls to his death at Kinghorn, Fife.
April - Six Guardians are elected to govern Scotland.
September - An envoy is sent to King Edward I of England.
The Bruce family enters into "The Turnberry Band" asserting their claim to the throne.

1289
November - The Treaty of Salisbury confirms that the "Maid of Norway" should become the new Queen of Scots.

1290
July - The Treaty of Birgham confirms betrothal of the six year old maid to the four year old Prince of Wales.
September - The Maid of Norway died in Orkney on her way to Scotland.*
December - Edward I's queen, Eleanor of Castile, dies.

1291
May - Anglo-Scottish Parliament at Norham.
June - Edward I, with armed host, arbitrates over Scottish throne as long as Scots swear fealty to him.

1292
November - Court of Claims pronounces in favour of John Balliol, and against Bruce "the Competitor" (Grandfather of the future king) for the Scottish throne. John Balliol crowned at Scone on St Andrew's Day and pays homage to King Edward.*

1295
July - "Council of Twelve" take power away from King John.
October - Franco-Scottish Treaty. The Auld Alliance between Scotland and France is renewed.

1297
May - William Wallace kills the Sheriff of Lanark and overcomes the garrison. He and William Douglas attack the English Justiciar at Scone. Robert the Bruce leads a Scots uprising in Carrick.

July - Scots nobles meet an English contingent to negotiate peace at the "Capitulation of Irvine" Andrew Murray leads an uprising in Moray.

September - Wallace joins up with Murray at the Battle of Stirling Bridge. English Army is defeated.*

July - Edward I crosses the border with armed host. Scots are defeated at The Battle of Falkirk.

August - Bishop Lamberton is made the third Guardian.

September - Wallace is sent on diplomatic mission to France.

July - Edward I leads a campaign in Galloway.

November - King Phillip of France recommends Wallace to the Pope.

May - Scots delegation visits the Pope to defend independence.

October - Scots envoys go to France to prevent truce between England and France.

1303
February - English routed at The Battle of Roslin.

August - Wallace captured at Robroyston near Glasgow and subsequently executed in London.*

1306
February - Robert the Bruce murders John Comyn at Dumfries.*
March - Bruce is enthroned at Scone by Isobel of Buchan.*

June - The Scots defeated by Earl Pembroke at The Battle of Methven.

August - King Robert is defeated by McDougal of Lorne at The Battle of Dail Righ.

September - The King escapes to Dunaverty then Rathlin. Nigel Bruce captured at Kildrummy and executed. King Robert's wife and Marjorie Bruce are captured at Tain.

1307
February - The King returns to the mainland at Turnberry Castle.

April - The first major victory over the English at Glen Trool.*

May - King Robert succeeds again at The Battle of Loudoun Hill*

July - King Edward I dies at Burgh on Sands.*

August - King Robert defeats McDougall of Lorne at The Battle of Brander.

October - The King assails Urquhart Castle forcing the Earl of Ross to submit.

August - The King now controls Scotland north of the Tay.

October - The Treaty of Inverness between Scotland and Norway secures the friendship of these two countries.

February - The King reconquers the southwest and Dumfries.

May - King Robert takes The Isle of Man.

June - The Battle of Bannockburn.*

1316
May - Edward Bruce is created High king of Ireland.

1317
January - King Robert goes to Ireland to fight alongside his brother.

May - The King returns home.

September - English clergy routed at "The Chapter of Myton"

1320
April - The Declaration of Arbroath is sent to Pope John XXII.*

August - The Soulis conspirators are tried.

October - King Robert pursues Edward II into England and defeats the English at The Battle of Old Byland.

1323
August - Andrew Harclay is executed for his "Treaty" with the Scots.

1324
January - The Pope recognises Robert the Bruce as King.

1326
April - The Treaty of Corbeil between Scotland and France.

1328
March - The Treaty of Edinburgh agreed at Holyrood Abbey.*

May - The Treaty is ratified in Northhampton.

July - Marriage of David Bruce to Joan of the Tower.

1329
June - King Robert the Bruce dies at his manor near Cardross. The Pope grants Scotland the anointing of the kings.

1330
March - James Douglas dies in Spain carrying the king's heart to the crusades.